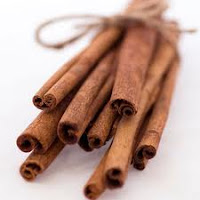 If you're allergic to cinnamon what is one to do?  So many recipes call for cinnamon!  Additionally, did you know that cinnamon is in the same family as bay leaves, kiwi, bananas and latex?  They come from the family 'Laurel' and you can 'cross-react' to all of them if you are allergic to one of them!  So, avoid them all so you don't react to any of them.

When I found out I was allergic to cinnamon about 15 years ago, I thought I would die!  I LOVED cinnamon!!  What on earth would I do?  No cinnamon rolls, no apple pie (though I can't have apples any more either!), no sweet potato pie!  Heaven's no!  I set out to find a substitute!  It took many attempts to find the right 'mix' of spices but I finally did it!!  There are some great spices to mix up and you can create your own 'cinnamon flavor' very easily!!  Your first 'expense' in doing this will be a bit costly, but it lasts a good while!

There is a wonderful spice known as Cardamon!!  It comes in two colors but mostly you will be looking for 'Ground Cardamon' from the green pods.  It is quite expensive to buy BUT you use very, very little!!  You will also need allspice and nutmeg.  Here is the mix!!

This is equivalent to 1 tsp of Cinnamon!!  That is it!!  If you need more, just use the proportions above and you have your 'faux Cinnamon!'  So, so simple and you avoid your allergy altogether!!  Enjoy!!
Posted by Unknown at 3:52 PM