Agave Syrup - What's all they hype and is it true? 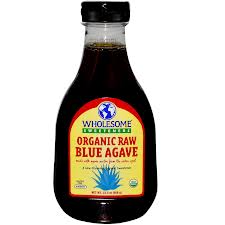 What is agave syrup?  Raw Agave Syrup is the purest form of Agave Syrup and is still collected the same way that ancient Mexican's (Aztec's) did many years ago.  Secondly, there is Agave 'nectar' but it is essentially the same thing!  There is much controversy about Agave Syrup and whether or not it is 'bad' for you.  Much of this controversy comes from misunderstanding about how it is processed.

There are two processing methods for Agave Syrup and that determines how it is LABELED.  To be labeled RA or RAW Agave Syrup, it must follow very strict guidelines and not be heated over 118 degrees F.  If it is raised above that temperature it is NOT RA or RAW Agave Syrup, it is simply Agave Syrup and is tadamount to high fructose corn syrup!  Often times they will be labeled Organic as well.  This has nothing to do with HOW it is processed!!  It simply means no CHEMICALS were used in growing the plant.  To be a true, traditional RA (or RAW) Organic Agave Syrup it has to not be heated too hot and be very carefully processed..

There are many types of plants but Blue Agave is often reserved for use in Tequila and is tightly controlled by the Mexican government when used for Tequila production.  It does make the best Agave Syrup.  There is differing colors of Agave Syrup as well.  Darker Agave Syrup has a stronger taste to it like honey.  Lighter Agave Syrup doesn't really partake any additional flavor to things, just mostly sweetens things.

Secondly, many feel that it can 'raise' triglycerides.  Agave syrup has fructose as it's main 'sugar' component.  And like any 'sugar' it is dose dependent.  If you eat too much of anything, it can be harmful.  On the positive side, it takes half as much to sweeten the same amount so you use far less than sugar.  A tablespoon of agave nectar contains 16g of carbohydrates of which 15 are attributable to fructose and glucose.  In comparison, an apple contains 25g of sugar of which it is sucrose, naturally.  Agave is also a natural fructose/glucose when it is 'sapped' from the plant.  It is processed much the way that maple syrup is made (except for the heat). 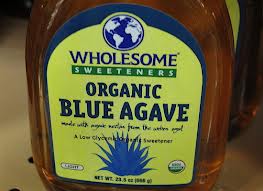 The bottom line?  Any sweetener you add whether it is home made corn syrup, maple syrup, honey, etc. all can have negative effects as it is all sugar in one form or another.  The big issue with Agave Syrup is in HOW IT IS PROCESSED!!  Avoid it if it does not say RA or RAW Agave Syrup!!

Notice anything about the two photo's?  They're made by the same company!!  One is Raw and the other is not!!  Be careful when you get it!!