What is a soursop? 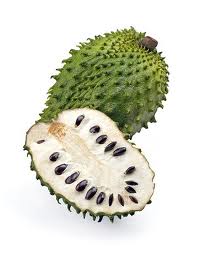 I have seen several posts about soursops lately and wanted to share this.  Big 'Pharma' hates the fruit and for good reason.  Many years ago they heard about it and the wonderful healing powers of the fruit but were unable to 'replicate' the healing properties of the fruit 'chemically' so they gave up the millions of dollars they put into research and said it was 'worthless' to pursue using it as a healing plant!!  So, just what is a soursop?

The definition from Wikipedia as well as other sources, is "Soursop is the fruit of Annona muricata, a broadleaf, flowering, evergreen tree native to Mexico, Cuba, Central America, the Caribbean and northern South America: Colombia, Brazil, Peru, and Venezuela. Soursop is also produced in sub-Saharan African countries that lie within the tropics. Today, it is also grown in some areas of Southeast Asia as well as in some Pacific islands. It was most likely brought from Mexico to the Philippines by way of the Manila-Acapulco Galleon trade. It is in the same genus as the chirimoya and the same family as the pawpaw."

The flavor is a combination of pineapple, strawberry but also somewhat citrusy with undertones of coconut and banana.  The flesh of the fruit is an edible pulp but you don't want to eat the seeds.  It is used in desserts, beverages, as well as jams, jellies, ice creams, and smoothies.  It is known by many names in other countries.

Nutritionally, it is high in carbohydrates (fructose) but has many good qualities to it.  It contains Vitamins B1, B2, and C.  It has been shown to inhibit breast cancer by inhibiting the regulation of epidermal growth factor regulation.  This was being studied but they cancelled the studies as they were unable to replicate the properties of the plant in-vitro in the lab according to some articles that I read.  As such, Big Pharma cancelled all research into studying this research.  You simply can't mimick mother nature sometimes!!  As such, some articles will state that it hasn't been studied 'in humans'.

Additionally, it is said to be a diuretic, aid in digestion, help with a hangover, relieve liver ailments as well as gallbladder problems and more.  This fruit has been extensively tested by Purdue University, however it is stated again that no 'human studies' were done.  I'm not really understanding why when they purport that it is 100 times stronger than any known Pharma chemotherapy!

So, if it's so great, there has to be a downside to it all right?  Actually, there is.  It is known that ingesting the fruit in very large amounts can lead to Parkinson's disease and fatigue.  So, eat it in moderation.  The fatigue was only found to arise from the leaves and this is known from those herbalists that use it as a sedative.  So, use only the edible inside of the fruit and in moderation and you shouldn't have a problem.  Again, this comes straight from studies at Purdue University!!  You can find information from two sites about it soursop or Purdue University.

Mix pulp, raw sugar, water and lime juice together until a boil, simmer on medium 20 minutes. Add vanilla and stir well. Add low-sugar sure jell and bring back to a boil for one minute. Skim off foam and ladle into prepare jars. Water bath for 15 minutes. Makes approx 8 half pints.
Posted by Unknown at 12:15 PM