What is HAE and what it's like to live with it? 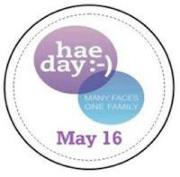 HAE - Many Faces, One Family

I often talk about having an 'immune disorder'.  Well I have HAE along with significant food and environmental allergies.  Just what is HAE and why is it so difficult to live with and what does it have to do with allergies?  HAE stands for Hereditary Angioedema.  It affects about 1 in 50,000 people and in the US it is estimated to affect about 6,000 individuals.  It is as it states, hereditary and it causes swelling of various parts of the body often for no apparent reason at all (though some have a 'mutation' form in about 10% of cases).  While many individuals with HAE might have 'triggers', many have no reason what-so-ever to cause their 'swells' to occur.  We often refer to ourselves as 'puffer fish'! LOL!  (yes, we can 'joke' about ourselves!) The most common places for these swellings to occur are the face, throat, arms, legs, or abdomen.  I tend to get them in my face, legs, and abdomen but mostly the abdomen (which you often can't see, but then again I can look 9 months pregnant when I'm not). (see photo before and after!)  This can become life threatening if it attacks the throat. 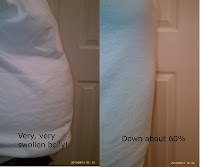 One of the biggest triggers for most with HAE is hormones.  Women are most affected by HAE because of  estrogen (the female hormone).  In fact it use be known as 'Hysterical Angioedema'.  Conversely, the male hormone testosterone is often a treatment for it but can cause huge side effects in women as well as men.  I was treated with the androgen's when I was first diagnosed and had horrible side effects.  I was only on it for about a month and was moody, emotional and had significant effects on my liver.  My entire life while I was on every type of hormone I had complications taking everything I took.  Additionally, every time I was pregnant I was sick, very, very sick.  There is a reason my girls are nearly four years apart! I was advised with my youngest to never get pregnant again.  At that time we never knew what the problem was but it all makes sense now.  Another trigger is soy.  Soy has estrogenic properties to it and can really make things difficult for those with HAE.  It is also one of the top 8 allergens.  Yet, many, many foods contain soy!  Talk about making it difficult to find food to eat!  I can't eat at certain places - ever, because they use soybean oil just to cook with!  Soy Lecithin also is used as a 'buffer' or 'binder' in many, many foods and while the FDA states that 'most with soy allergy should not be bothered by this substance' many of us with a true allergy are most definitely 'bothered' with it.

HAE is NOT an allergic reaction.  It does NOT respond to allergic reaction medications like antihistamines, epi-pens, or steroids (though many physicians try to treat us with those!).  It just doesn't work.  Many HAE patients have died waiting for proper treatment trying to TELL the physician this and they refused to listen to them.  I had one occurrence in an Emergency Room telling the physician what I had and was told "I'm not treating you for something you don't have."  I was already diagnosed, I just didn't have the proper medication prescription yet and had been taken off the androgen's due to the side effects.  This just isn't acceptable.  Education of this disease is imperative to save lives!

Additionally, many of us with this also have significant food and environmental allergies (which is why they often can 'confuse' us as having an allergic reaction.  I have some of the worst there is.  One immunologist I visited asked me 'What aren't you allergic to?'  He was actually being quite serious.  My list of what foods I CAN eat is far shorter than what I can't eat.  Eating out became a nightmare let alone shopping for food (I now pack my lunch almost every day).  Our families entire way of living had to change.  This was nearly five years ago but became more intense when we found out about the HAE last year.  I will never forgot going to the grocery store that first day just trying to find a spaghetti sauce that I 'could' eat (from a jar) and there wasn't a single one!  Not to mention the pasta!  I couldn't find anything that I could buy!!  I came home and just cried and cried.  I became seriously depressed that year.  If it wasn't for my girls getting me involved in learning to cook all over again by watching 'The Food Network' and 'The Cooking Channel' I don't know what I would have done!  There are many, many things that I simply can't avoid (environmental allergies like grasses, weeds, molds, etc.) and I still have to take antihistamines every day.  But, it is far better than it ever was.  But why is HAE and allergies so closely together?  Well, they are both on the same 'cascade' in the body!!  There is a part of the immune system known as the 'Complement Cascade' and HAE is the first complement (it affects C1 Esterase Inhibitor)!  Allergies come into play a little bit down the line and if the complement system is 'broken' the rest can be affected.

HAE has three 'types' as well.  The types really don't matter except when it comes to treatment and how 'insurances' treat you as well as how you are diagnosed.  It is quite complicated and far too long to go into this short post.  The best place to get information from is the Hereditary Angioedema Association.  They are fabulous at helping people with diagnosis and treatment options!  I don't know what I would do without them!!

I now 'can' (yes, that's right, old fashioned canning!) all my own foods including condiments, fruits, vegetables, meats, sauces, soups, stews, you name it!  I make my own spices (obviously as I sell them!), make my own soaps, lotions, creams, and eat the healthiest life I have ever lived!  Even sulfites in shampoos, soaps, toothpaste, etc, I have had to get away from.  If I get something in my diet that is a 'no-no' I pay for it dearly!  Sometimes it can be immediate but other times it can be 2-3 days later.  I just can't risk something being in food that I can't have.  Food manufacturers do not have to completely 'list' all their ingredients.  Spices often only have to list 'spice' and when you're allergic to many spices, this poses a problem. 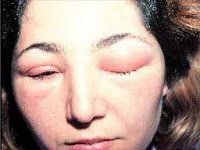 One of the worst parts about living with this?  Many people often don't 'believe you', they think you're 'making it up' to get out of things (like going to work) or from what I've heard from other patients, that they're 'drug seeking' for pain medications.  Thankfully, I have a fairly high pain tolerance and only when I'm having severe bladder spasms have I had to take anything for severe pain as it will keep me up all night and I don't get any sleep. Could you drive to work looking like the lady in this photo?  I've often woken up like this!  I actually drove to work yesterday like this!!  It took nearly six hours for my medication to bring it down due to my stress level.   I now take a medication known as 'Firazyr' that helps relieve these 'swells' (invisible or outward) and it will go away in hours, not days (this medication can run from $7,000 to $8,500 per shot!).  Most times it will take just a few hours, but other times it can take two doses and up to 8 hours or more to subside depending on the severity.  Stress is another major factor that makes me worse and when it's stress is when it usually takes longer to subside.  Unfortunately, I've been quite stressed lately.  It took 38 years to get a diagnosis.  At least I now know and have a treatment.  That treatment is only FOUR YEARS OLD!  We need awareness of this potentially deadly disease.  I will post again when HAE Day approaches!  It is May 16th and the first day for this was just last year.  So, don't judge someone because they have an 'invisible illness' that you may not understand.  It's hard enough in this life and none of us get out of it alive.  Let's all be kind and supportive of each other!  God bless to everyone!  Support HAEA!  Help us find a cure!
Posted by Renee at 7:52 PM