Do you love Starbuck's Frappucino's?  I sure do - the bottled ones.  But, I've been highly addicted to them and I've needed to get off of them for a long time in trying to get completely Paleo.  There is also the little issue that I am technically allergic to caffeine!  So, why is it so hard for me to give this up?

Allergies to anything just like someone 'addicted' to sugar play mind games with you.  When you try to stop it, you mind tells you you 'need' that substance and you 'crave' it.  So, as with anyone addicted to anything it's been very difficult to get away from.  I have come up with a recipe for a Paleo friendly Iced Coffee!  I've been testing it over the week and it's really pretty good and tastes very similar to Starbuck's Frappucino Iced Coffee in the bottle!  I will be gradually switching from 'caffeinated' to 'decaf' over the next month.  Right now I am down to just one cup a day (which is really only 1/2 a cup of coffee in this recipe) so it should be a bit easier now. 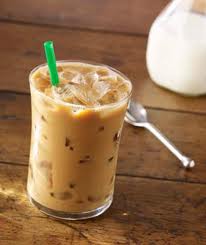 Coffee:
Whatever brand you prefer brewed very strongly. This will keep in a pitcher in the fridge up to a week.

Directions:
Pour coffee and maple syrup in microwave safe cup.  Microwave 1 minute to 'melt' the maple syrup into the coffee, stir well.  Add the milk and stir again.  Top off with lots of ice to chill and serve!

So, how will I 'wean' towards decaf.  As a nurse practitioner I learned how to wean infants from formula to milk.  It's pretty simple actually but time consuming.  I will have to 'adjust' it a bit though.  With milk I would have the parents replace one ounce of formula with milk every 3-4 days.  So, with this since it is only 1/2 a cup I am going to adjust it when I brew the coffee itself.  So, instead of say using 3 scoops of regular coffee, I will use 2 3/4 regular to 1/4 decaf coffee and adjust every few days.  Then I don't have to worry about 'mixing' everything as I go.  I will see how it goes as I really, really need to quit this habit!